Ian Darling is an award winning social impact documentary filmmaker. He is Executive Director of Shark Island Productions and Founder and Chair of the Shark Island Institute.

His director and producer credits include Suzy & The Simple Man, Stories From the Inside, Paul Kelly – Stories of Me, The Oasis, Polly & Me, Wall Boy, The Soldier, In The Company of Actors, Alone Across Australia Woodstock for Capitalists and Stories From The Inside.< He is also an Executive Producer of How To Change The World, UNREST and Last Cab To Darwin.

He is currently in pre-production on The Genesis, a documentary about homelessness, and an environmental film about forests. He is also Executive Producer for 2040, and Brainiacs, both in production.

He is Chair and Moderator of Good Pitch² Australia, and is currently working with 19 social impact documentaries and outreach campaigns, with films including That Sugar Film, Gayby Baby, Prison Songs, The Hunting Ground, Frackman, Call Me Dad, Constance on the Edge, Zach’s Ceremony, Whiteley and Blue.

Ian Darling has been Chair of The Caledonia Foundation since 2001, and was Managing Director of the Caledonia Investments group from 1992 to 2003.

He is a Member of the Impact Partners Advisory Board in New York. He is Founder and Patron (and former Chair) of the Documentary Australia Foundation, and also Patron of the ArtsLab, Kangaroo Valley. He was Chair of the Sydney Theatre Company and the STC Foundation, from 2006-2010. He has been a Director of the National Institute of Dramatic Art (NIDA), Chair of The Oasis Youth Support Network, and Member of The Salvation Army Advisory Board.

He is a Life Patron of the Sydney Theatre Company, a Governor of the National Gallery of Victoria, and a Benefactor of the National Portrait Gallery. He is an Eminent Member of the Geelong Grammar School Foundation, having led the project for the School for Performing Arts and Creative Education (SPACE). He was a recipient of AbaF’s Business Arts Leadership Award and his homeless film project THE OASIS was named one of ‘Australia’s Top 50 Philanthropic Gifts of All Time.’

He recently was named as Australia’s Leading Philanthropist by Philanthropy Australia. He received the AFI Award for Best Direction in a Documentary, is a Walkley Awards Finalist, and has been nominated for numerous Australian Directors Guild, AFI, Film Critics and IF awards. His photographs have been finalists in the National Photographic Portrait Prize, the Moran Contemporary Photographic Prize, the Sydney Life Photography Prize, and the Head On Portrait Prize.

He has a MBA from IMD Switzerland, and a BA from the Australian National University. 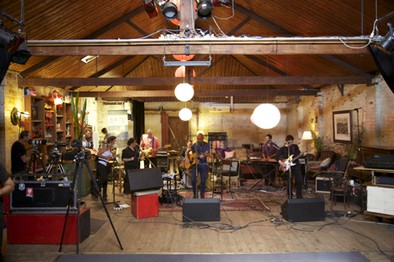 Sally Fryer is Senior Editor at Shark Island Productions and a Director of the Shark Island Documentary Fund. She has cut well over 100 documentaries during her career and in 2008 won the AFI Award for Best Editing in a documentary for THE OASIS. THE OASIS received 4 nominations at the AFI Awards 2008 – Best Documentary, Best Direction, Best Editing and Best Sound. It won Best Direction and Best Editing. In 2009 she completed the two short films POLLY AND ME and WALL BOY, part of the ongoing outreach and education campaign for THE OASIS.

She has just completed the feature length doco PAUL KELLY - STORIES OF ME, and is supervising editor on OUR LITTLE GARDEN.

Sally has 26 years experience as a documentary film editor both in London and Sydney. She worked principally for the BBC and Channel 4 in the UK and for the ABC and SBS since her arrival in Australia.

In 2007 she completed IN THE COMPANY OF ACTORS – a feature documentary in which a company of actors reveal the magic and struggle of creating world class theatre. The film had its world premiere at the Sydney Film Festival in 2007.

She was a finalist for the Dendy Awards Best Documentary Category 2005 with POLITICAL FOOTBALL, and was nominated for an AFI Award for Editing of THE ORIGINAL MERMAID in 2003, which went on to win the Film Critics Award for Best Documentary. Her other Australian credits include DUST TO DUST, DOPE - A BATTLE FOR THE SOUL OF SPORT, ALONE ACROSS AUSTRALIA, DRAMA SCHOOL, WOODSTOCK FOR CAPITALISTS and THE TRACK. Many years ago she was Senior Editor on WATERGATE for Brook Lapping in London, which won the International Emmy for Best Documentary Series in 1995.

She is married and the very proud mother of 2 sons, Louie and Thommo.

Susan has produced and executive produced documentaries for over 25 years. Her films have been screened around the world, winning many awards and international acclaim.  She has worked with ABC, SBS, ARTE (France), ITVS (USA), HBO (USA), CH4 (UK), BBC (UK), YLE (Finland), CBC (Canada), the Sundance Institute and National Geographic.

Susan is a Producer with Shark Island Productions, and her credits include the recently completed short films POLLY AND ME and WALL BOY and documentaries THE OASIS and IN THE COMPANY OF ACTORS. She is currently producing the feature documentary PAUL KELLY - STORIES OF ME about one of Australia’s most successful singer/songwriters.  This film will have a commercial cinema release in Australia in mid October.

Her previous films include LIFE IN MOVEMENT, a tragic story of a gifted young dancer, HONEY BEE BLUES, GLOBAL HAYWIRE by Academy Award winner Bruce Petty, '4' directed by Tim Slade, OVER MY DEAD BODY directed by Ian Walker, MEN AND THEIR SHEDS by James Manche, ETERNITY about the enigmatic Arthur Stace directed by Lawrence Johnston, SOMEWHERE BETWEEN LIGHT AND REFLECTION and YOU MUST REMEMBER THIS, an expose about Alzheimer’s Disease. Her very popular short drama, FETCH, screened at over fifty world festivals, including Official Competition at the International Festival du Cannes.

While making films, Susan is also the Executive Director of the Documentary Australia Foundation (DAF), established in 2008 to bring filmmakers and philanthropists together to create social change through documentary film. DAF seeks to engage audiences first through powerful storytelling, then motivate them to act through education campaigns extending the life of the film.  The growth in philanthropic engagement in documentary is a direct result of the work of DAF.

From 1998 to 2005, Susan was the Documentary Investment Manager at the Film Finance Corporation Australia (FFC), where she assisted filmmakers in negotiating finances for their documentaries. During this time, Susan financed over 400 productions and helped internationalise the Australian documentary industry.

Susan served 6 years as a Board Director for the South Australia Film Corporation (SAFC), was a founding member and served 6 years on the Board of the Australian International Documentary Conference (AIDC).  Susan is now a member of the International Documentary Advisory Committee for Hot Docs, Canada and a Committee Member for the ACT Screen Investment Fund.

PAUL KELLY - STORIES OF ME is Mary's first producing credit. Mary is both Production Manager and Line Producer for Shark Island. She recently completed THE SOLDIER and the  short films POLLY AND ME and WALL BOY. Mary was Line Producer on the feature documentary THE OASIS and Production Assistant for IN THE COMPANY OF ACTORS.

She is currently working on the feature length documentary OUR LITTLE GARDEN and the Education and Outreach for PAUL KELLY - STORIES OF ME.

Prior to joining Shark Island Mary freelanced as a Stage and Production Manager. She worked regularly with Sydney Theatre Company, Company B Belvoir, Griffin Theatre Company, Performing Lines, Force Majeure and was a Production Co-ordinator for the Olympic and Paralympic Arts Festivals Sydney. Mary has lectured in Stage Management for the NIDA Open Program, the University of Western Sydney and the Wesley Institute. 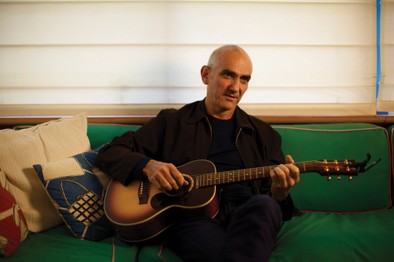 Ruth has led and directed THE OASIS, POLLY AND ME/WALL BOY initiatives, building strategic philanthropic and community partnerships, and increasing the impact and reach of each program.  She has over 15 years public and private sector experience: project and program management in government and non profit, business and network development, marketing and events strategy and implementation - building capacity is central to all her roles.   Ruth loves working with people and is looking forward to her greatest challenge yet, designing, developing and implementing the Education and Outreach Program for PAUL KELLY - STORIES OF ME in collaboration with the Shark Team and key philanthropic and community partners.

Toby Creswell is an Australian music journalist and pop-culture writer. He was editor of Rolling Stone (Australia) and a founding editor of Juice. Creswell wrote his first article on rock & roll for Nation Review in 1972. He subsequently wrote articles about all aspects of popular culture and music for RAM, Billboard, Time, the Sydney Morning Herald, the Age, Roadrunner and a range of national and international magazines and newspapers. He has worked for MTV and a variety of television programs as a writer and presenter. As a keyboard player for seminal post-punk band, Surfside 6, he wrote the B-side, "School's Out", to their 1980 cult hit single, "Cool in the Tube".

In 1985 Toby became editor of the Australian edition of Rolling Stone and two years later was in a partnership which took over the franchise. He continued to edit Rolling Stone until September 1992. The following year he started, in partnership with Lesa Belle Furhagen, the publishing company Terraplane Press/Terraplanet and was editorial director of the magazines Juice, HQ, Monument, Big Hit and Australian Style.

In 1993, he wrote his first book Too Much Ain't Enough a biography of singer Jimmy Barnes. In 1999, he and Martin Fabinyi wrote The Real Thing: Adventures in Australian Rock & Roll (Random House). With Samantha Trenoweth he wrote 1001 Australians You Should Know (Pluto Press). His other books include; Love is in the Air: Stories of Australian Pop Music (ABC Books, 2003) Notorious Australians (ABC Books, 2009), 1001 Songs (Hardie Grant, 2007).

In 2002 Creswell created The National Karaoke Challenge for SBS. In 2007 and 2008 he created, wrote and produced the series Great Australian Albums for SBS. He has written and produced a number of projects for television including a short history of Australia’s involvement in the Vietnam War (All the Way) which was nominated for an AWGIE Award and a Walkley for its script. He also wrote and produced the films Cannot Buy My Soul (SBS) and The Wild One (ABC TV).

He has worked as a feature writer in Australia, North America, the Middle East, Europe and Asia for the past 33 years and has written for the Australian, the Sydney Morning Herald, the Melbourne Age, HQ magazine, the Bulletin, Good Weekend, the Australian Women’s Weekly, Italian and German Vanity Fair, Newsweek and The Daily Beast. He is currently a contributor to Good Weekend.

He is also the author of four books with a fifth currently in train.

Whether it was witnessing the human tragedy in the aftermath of a murderous regime for “Cambodia: After Pol Pot”, hearing the stories of survivors of the Atom Bomb for “Nagasaki Journey”, hanging with the French Foreign Legion for “Legion of the Damned”, or with Aboriginal communities in Arnhem Land, the Kimberley, or the Western Desert, Simon has relished the opportunities to learn about people, and to bring their stories to a wider audience.
Simon's work has been shown on all networks in Australia, and he has worked for the Discovery Channel, National Geographic, the BBC and MTV internationally. Along the way, he has won awards for much of his work including for Mark Lewis's Pursuit of Excellence: Synchronized Swimming,  Tom Zubricki's “Vietnam Symphony”, and ACS awards for music videos he shot and directed for Jimmy Barnes and Dannii Minogue, for the BBC series “Frontiers” and, notably, for "In the Company of Actors", his first collaboration with Shark Island Productions and Producer/Director Ian Darling.
Simon is proud to have worked with Ian and his team again, on a project of the scope, colour and detail of “Paul Kelly: Stories of Me".